So it looks like I’ll be hitting the road again this week, this time heading to Chicago to see my nephew graduate from the Naval Academy.  So this will be another abbreviated week of meal prep.  Of course, I had to get my snacks prepared for the trip too.

I made up baggies of snacks made up of pepper jack cheese and strawberries, single-serving packets of pistachios and turkey pepperoni, and tangelos and halos with pistachios.  I’ll also have some Premier Protein shakes as meal replacements while driving and Larabars if I start feenin’ for something sweet.

I also made some kale chips. Just sprinkle with the seasoning of your choice (I used just a small sprinkle of salt and garlic powder), put in microwave for about 8 minutes (mix halfway through), and done.  They come out just as crispy as when making in the oven.  Note:  DO NOT USE ANY OIL, such as what you will find in many recipes for baking these in the oven.  I did that, walked away to do some multi-tasking, and came back into the kitchen to find my microwave on fire.

Notice that you don’t see any of those veggie straws included in my meal prep…I was eating too many of those damn things.  I’m going to hold off on having any of those for right now.  Continue reading on to see what was up…

So now on to this week’s meal prep.  But before I go into it, let me just touch on last week.

The week before last, I went on a little road trip, and decided to relax the rules for my time away and I had a few too many carbs every single day I was away.  And that made last week HARD AF (if you don’t know what that means, ask your little niece…if she’s on social media, she will know. Just don’t wash her mouth out with soap since I told you to ask her).  I cannot stress how ridiculously hard it was to get back on track.  Even though I didn’t have any of my specific trigger foods, going four days of allowing carbs that  I usually do not allow myself to have made things more difficult thaN I imagined it would be.  Combined with the fact that I was PMS-ing, I got hit with a double-whammy.  I was craving carbs like crazy. And what’s weird is that I also noticed that my skin started to break out; since cleaning up my diet my skin has cleared up and evened out nicely.  So…with that being said, while I’m in Chicago, I’ll still need to keep carbs to a minimum.

I have my snacks prepped for the road, and I wanted make some things for the few days I will be in town.  First, I did make a few of those caprese stuffed mushrooms again, since they are so easy and quick to make and taste really good.  I  also have a some of the spinach and ricotta zucchini cannelloni left over from last week, as well as some Greek yogurt, fruit, nuts, and protein shakes for breakfast and snacks.  I wanted to make one more dish for variety sake.  I was surfing online to see what I could make with the items I had on-hand, and settled on a low carb broccoli and mushroom casserole.  Below are the ingredients that I used; only thing different from the original recipe was that I decided to add turkey sausage to make it a complete meal and a dash of coriander:

I basically made the entire recipe according to the directions, but with the exception of the turkey sausage and the coriander.  I diced the mushrooms and onions, and sauteed them in a pan with butter and garlic.  Then I cooked the sausage in the same pan and added it to the vegetable mixture. I steamed the broccoli in the microwave, and mixed into the casserole dish. 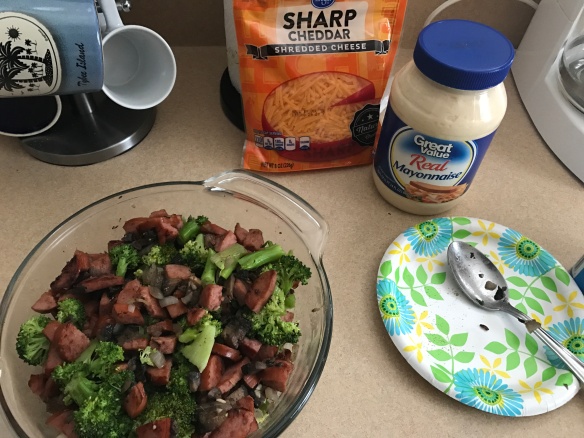 When the meat and veggies were done, then I added the sharp cheddar and mayo.  And if I had to do this recipe over again, this is where I’d make a change – I would have added maybe two eggs to the mix to help it stay together better.  Also – and this is just my preference – I would have used half as much turkey sausage and twice as much broccoli, so that the broccoli is the star of the show instead of the turkey sausage.

It still came out pretty ok, but a little too rich and savory for my taste.  So I decided to dilute it so-to-speak with some quinoa.  If you decide to do the same (especially you out there that are bariatric post-ops), you’ll want to go easy…even though quinoa is considered healthy, it is not typically recommended  for us because it is still a carb.  Quinoa has about 9g of net carbs per serving (which is 1/4 cup)…but I had to do something to save this dish (I’m open to other ideas if you have any).  Eating it with the quinoa means having to measure how much I have (not just eyeball it, but actually measure) and really watch myself the rest of the day.

So what are you all having this week?  I’d love to know!