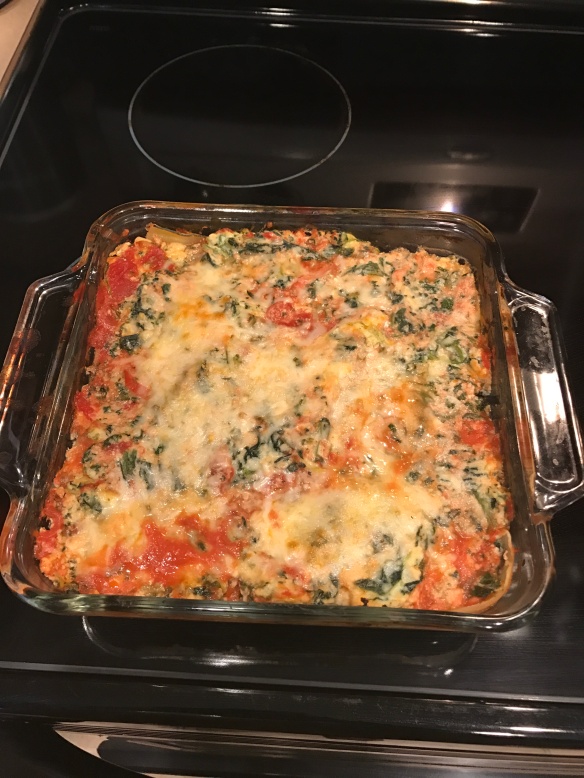 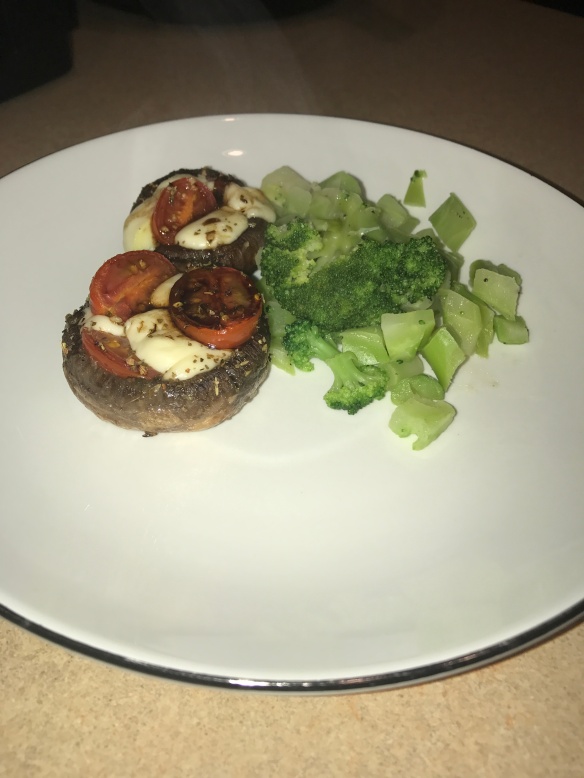 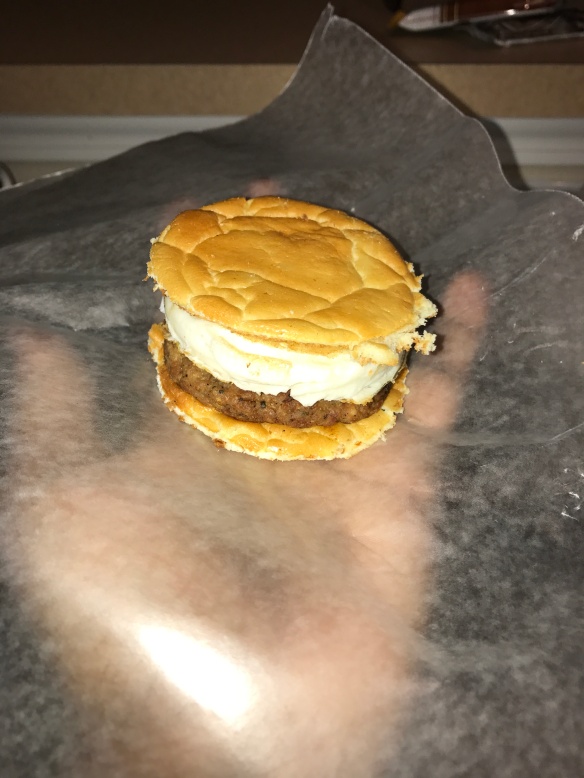 After a week with lots and lots of shakes, it’s back to regular meal prep for this week.  So for this week, I have the following:

And of course, I have some snacks prepared, but I wanted to show the results of this recipe I found online for Quest cookies.

For this recipe I used the following: 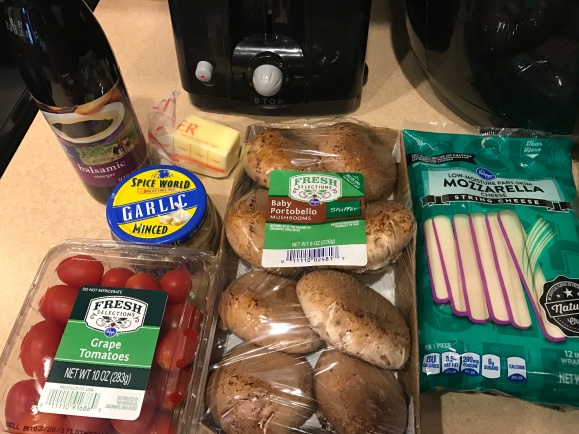 I found the recipe for the stuffed mushrooms on Cafe Delights; I love mushrooms and l liked using this easy meatless dish as a health low-carb alternative to a typical dinner with meat.  The original recipe calls for large portobellos.  When I got to the store, all they had was baby portobellos, and I just decided to use those because I was tired at the time and didn’t feel like driving to any other stores (just being honest).  Also, I didn’t think about it at the time, but fresh mozzarella would have been better.  Instead, I used part-skim mozzarella cheese sticks; still came out really good. 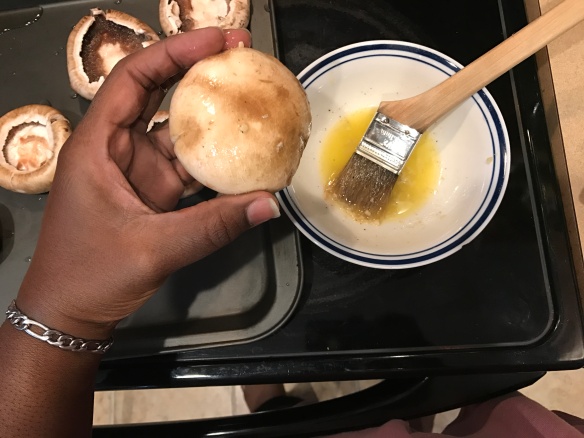 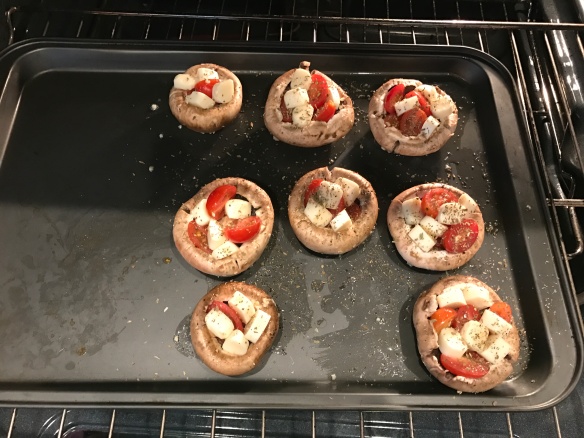 So outside of those two exceptions, I made the recipe to plan – covering the mushrooms with garlic and butter, then placed sliced grape tomatoes and mozzarella inside.  I sprinkled a little oregano on top and then placed in the oven and baked until the cheese melted.  And when it was done, I drizzled with the balsamic vinegar.  And I decided to make some steamed broccoli to go with it. 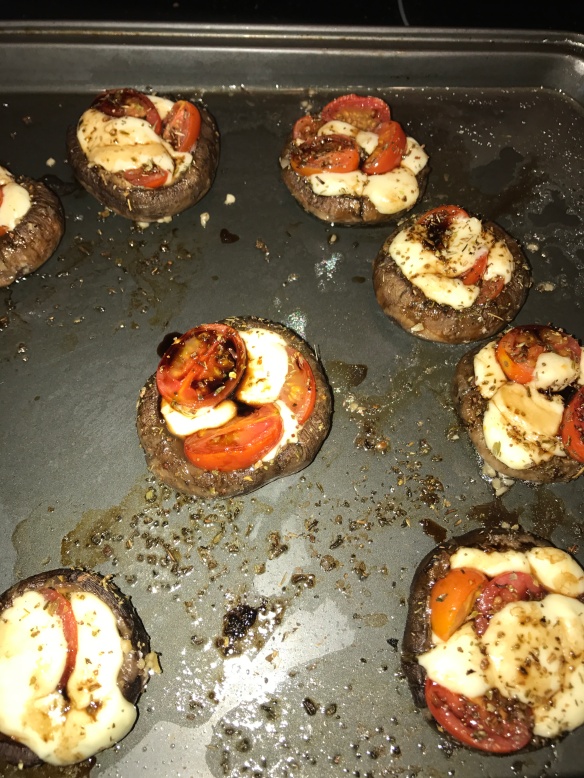 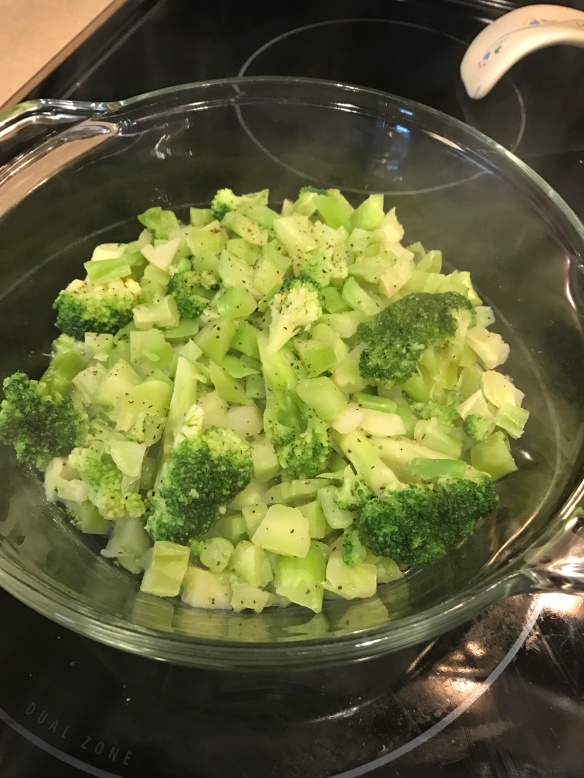 For this recipe, I used the following ingredients: 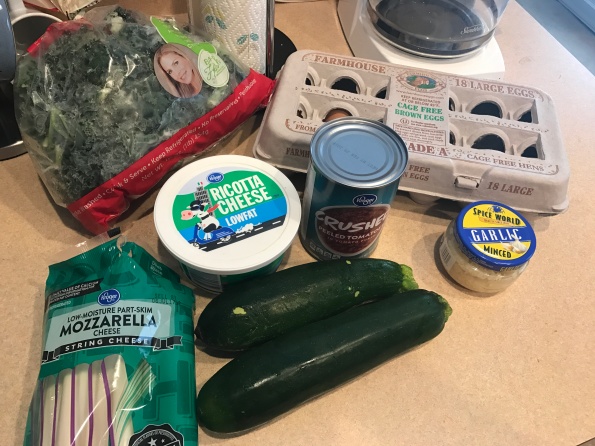 Found this one again on Cafe Delights.  I wasn’t sure what to pair it with and didn’t feel like having a salad…at the time had a taste for sweet potatoes, so I decided to make oven roasted sweet potatoes to go with it.

So I started off slicing the zucchini, and once done, I made up the ricotta-spinach mixture according to the recipe, but I added shaved parmesan cheese to the mix.  Also – in the pic above you see a bag of frozen kale…initially I was going to use kale in the recipe instead of spinach, but when I put it in the microwave to defrost, it actually turned into kale chips.  That was a nice surprise!  So I had to defrost a bag of frozen spinach, squeeze the water out, and added to the cheese mix. 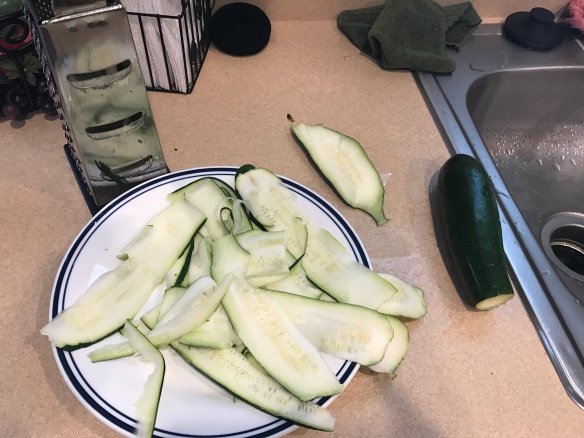 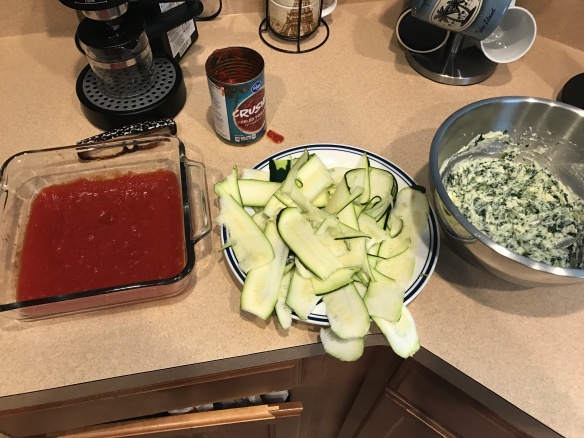 Then came the fun part! I wrapped up the cheese mixture in the zucchini slices.  I used an 8 x 8 inch casserole dish. 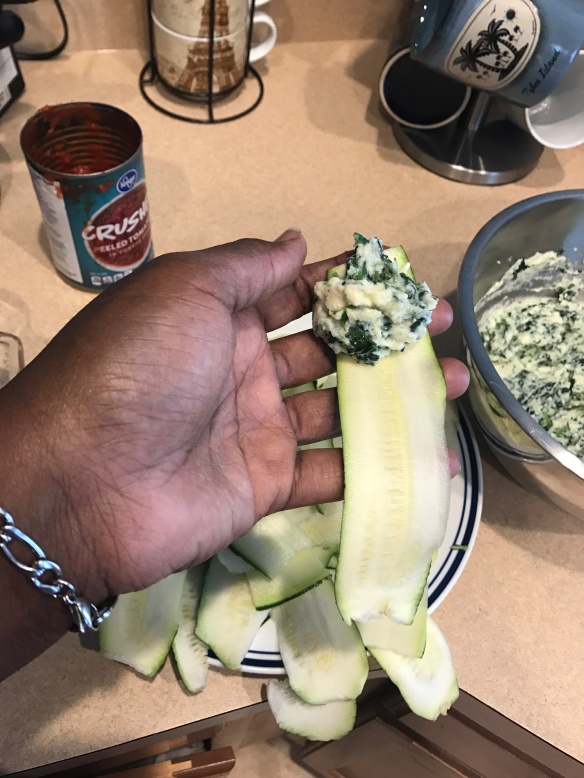 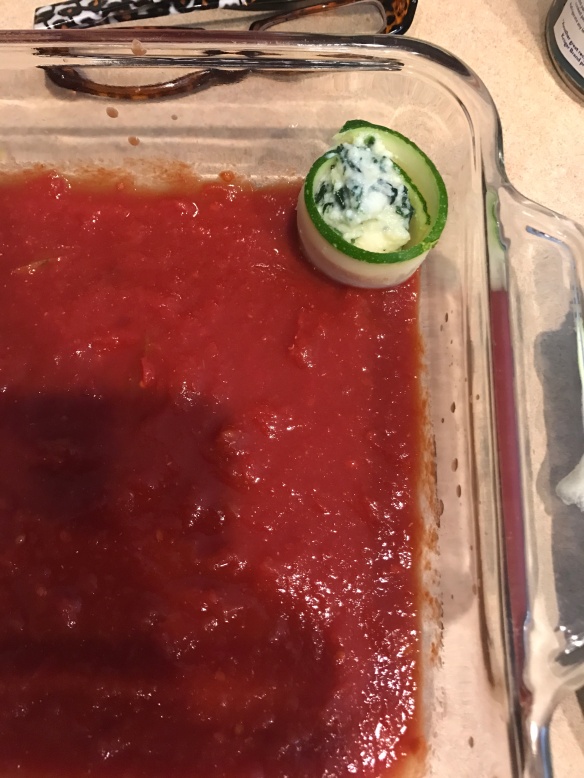 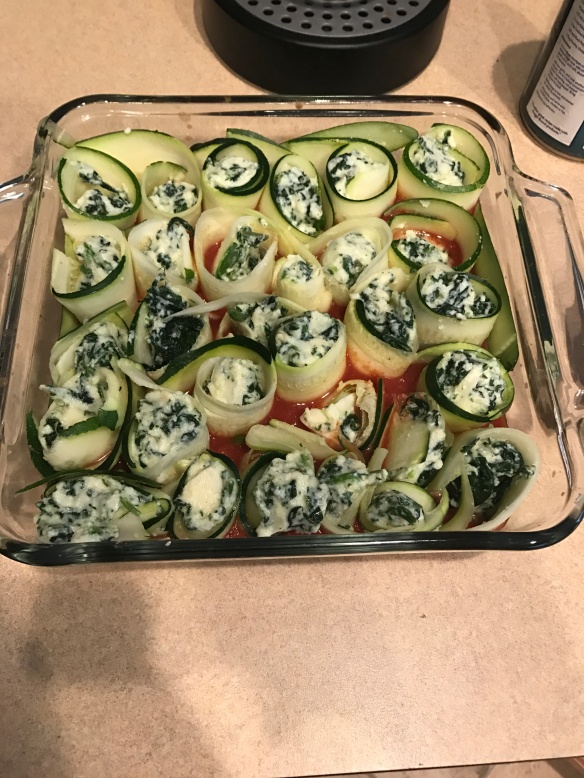 I topped the cannellonis with the rest of the crushed tomatoes and cheese mixture, then placed in the oven to bake.  I did have to drain off some liquid from the dish. 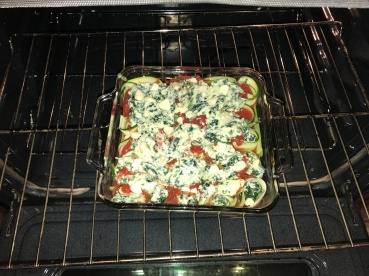 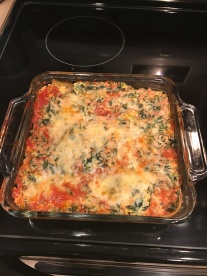 For the oven roasted sweet potatoes, I found a simple recipe on All Recipes and basically made it according to the recipe. 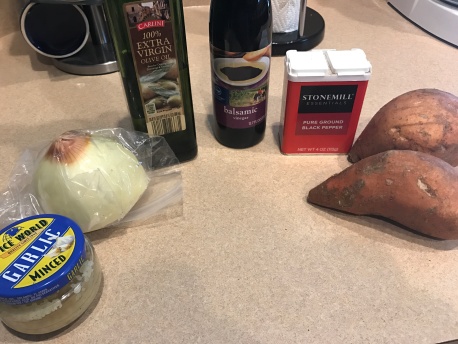 And it was really easy – peel the sweet potatoes, dice, and add all the ingredients to a bag (except the balsamic vinegar) and shake.  Then put on a cookie sheet to bake. 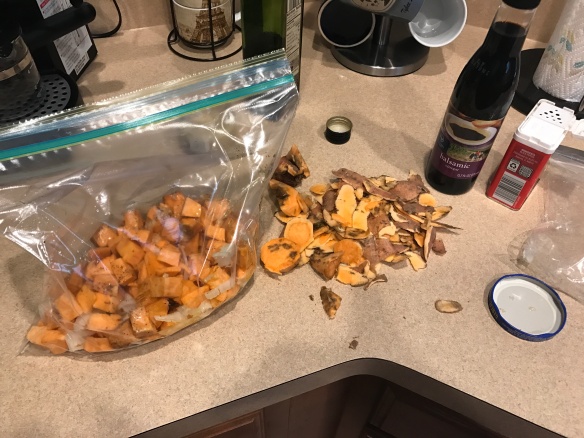 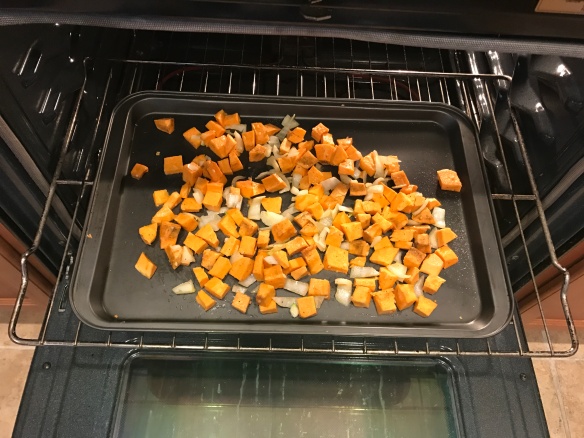 I drizzled some of the vinegar on top when done.  And this was the result, a mix of zesty and sweet.  The zucchini cannelloni came out good, but not with enough flavor to me…later in the week I added a little more parmesan and a dollop of pesto, and that really did the trick.  So maybe next time I will use basil pesto instead of only crushed tomatoes. 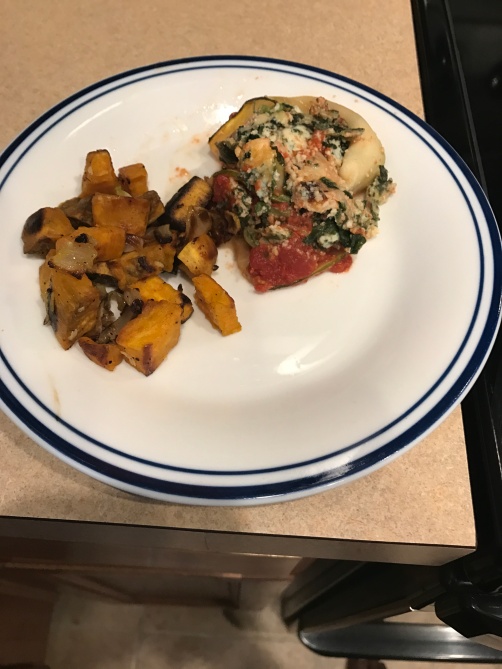 The ingredients for this was…well…turkey sausage and eggs. 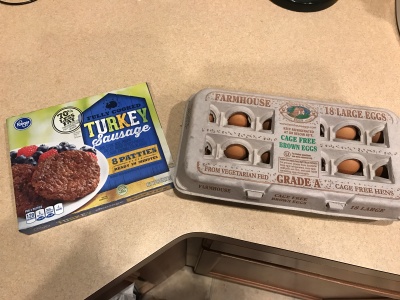 I’m all about saving time, so I made these at the same time on a griddle.  But I found a cool trick from Tip Hero – to make the eggs using the tops from mason jars so they come out perfectly round.  I posted a pic of the cooked egg sideways so you can see how thick it is. 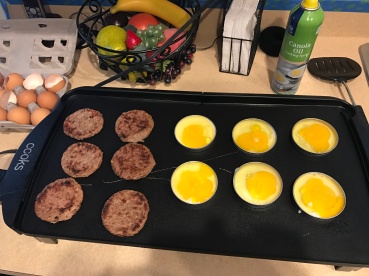 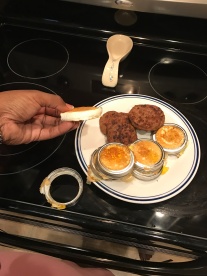 For the bread, I actually made the garlic parmesan oopsie bread I made a few weeks ago.  And when the bread was done (actually they got slightly overdone because I was multi-tasking), I used the mason jar top to make them perfectly round as well to fit the size of the sandwich.  This will go great with sugar-free grape jam. 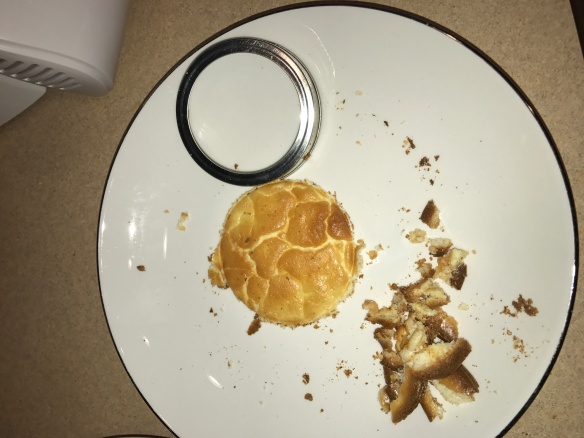 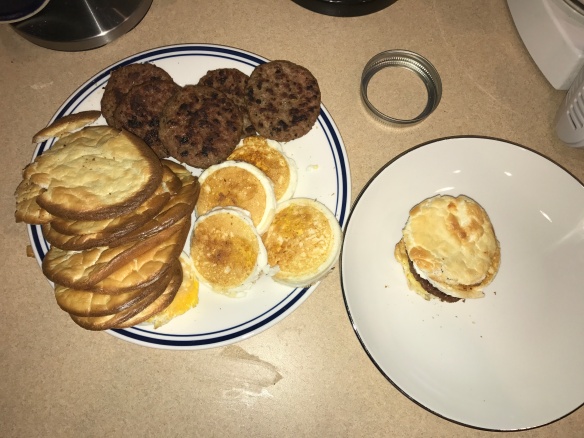 I actually got this idea from April Herbel, who posted it on her YouTube channel.  It is so simple and I wanted to see how I’d like it, and it just so happened that I saw the Quest bars on sale.  So I got two bars, double chocolate chunk and chocolate peanut butter.  And per her instructions, I cut the bars up into pieces and placed on a cookie sheet. 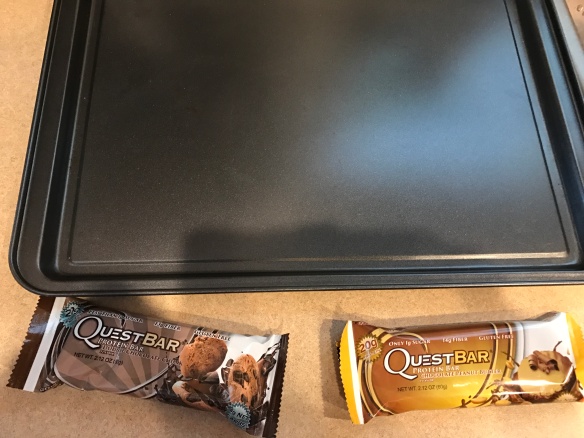 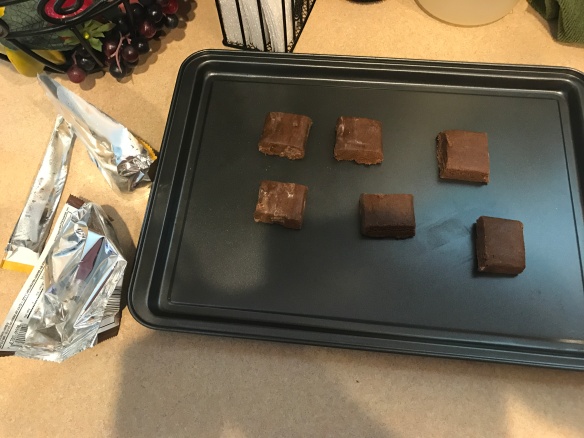 It’s a good option if you have a taste for cookies and just have to have some, but these were just “ok” to me.  I thought the double chocolate chunk was ok, but I didn’t like the chocolate peanut butter at all.

Of course, I have some low carb snacks on hand for the week. 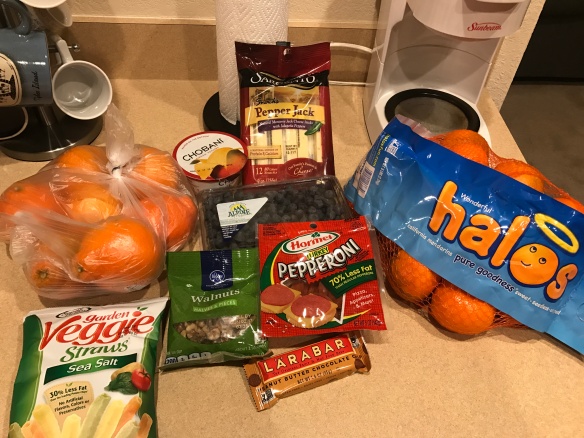 So what are you all having?  I’d love to know!  And have a great week!