I’m going out of town this week, so since I had so much of the 13-bean soup leftover from last week, I decided only to make another breakfast and shop for a few snacks.  After searching on Pinterest, I saw two great recipes – one for a breakfast casserole with kale, sausage and sweet potato and another for English muffins.

I found the breakfast casserole recipe here, but as usual I mixed it up a bit.  For one, I don’t eat pork or beef, so I used turkey sausage.  I didn’t have any turkey bacon in the fridge and I was too lazy to go to the store and get some, so turkey sausage is the only meat in this recipe.  I got some mild Italian turkey sausage from The Fresh Market.  The original recipe does not include cheese and I decided to include some.  Not pictured is the almond milk I used in the recipe as well.

So I started off by putting the sweet potato in the microwave for a few minutes to help soften it a bit to make cutting it easier (don’t do like how I did it; I recommend peeling it first, then microwave to soften).  Meanwhile, I mixed up the milk and the eggs together and pan fried the turkey sausage.  When the sweet potato was softened, I peeled it and cubed it, and placed back in the microwave to fully cook as instructed.

When the turkey sausage was done, I removed it from the pan and put the kale in there to cook until it was wilted (pictured is a 16oz bag; I only used half of it for this recipe).  I seasoned the kale with coriander and cumin – it smelled sooo good! 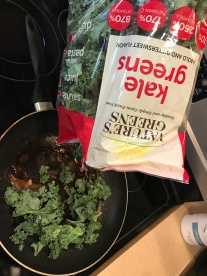 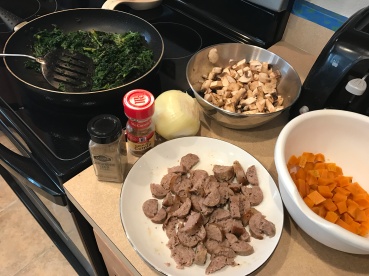 Once all the kale was done, I all the ingredients it to a casserole pan and mixed in about a cup or so of cheese.  Then I poured the egg mixture on top, and popped it in the oven until done. 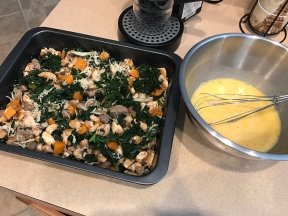 I tasted it, and I think it came out good, but if I had to change anything, I would add maybe some dry mustard and maybe test using sharp cheddar instead of the Italian spice blend.  But everything complements each other very well. 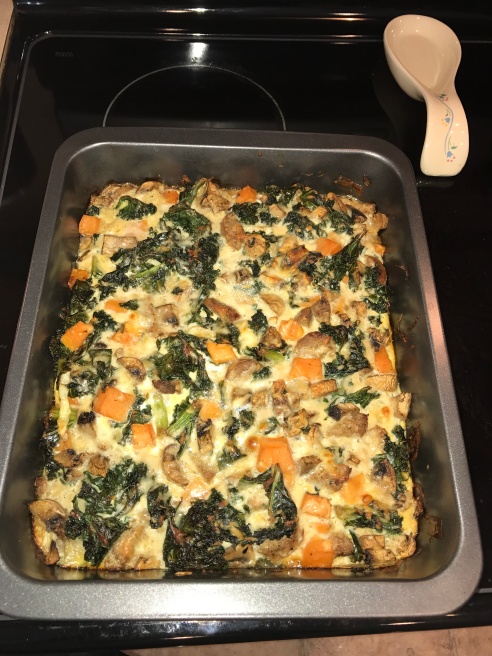 Now as far as the English muffin, I found it here on Pinterest.  I pretty much made it as the recipe instructed, but halfway through I was thinking how much better this recipe would be if it was like an “everything” bagel on the outside… 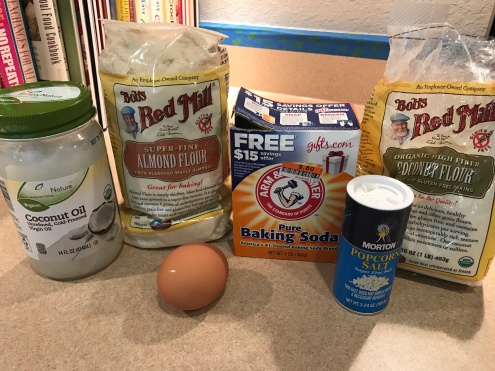 I mixed all the dry ingredients together (coconut flour, almond flour, baking soda, and salt), then added the wet ingredients as instructed.  For the “everything” spice blend, I found this recipe here, but I didn’t have all of the necessary ingredients and didn’t feel like going back to the store, so here is what I used – onion powder, garlic powder, sesame seeds, salt, and coconut oil. 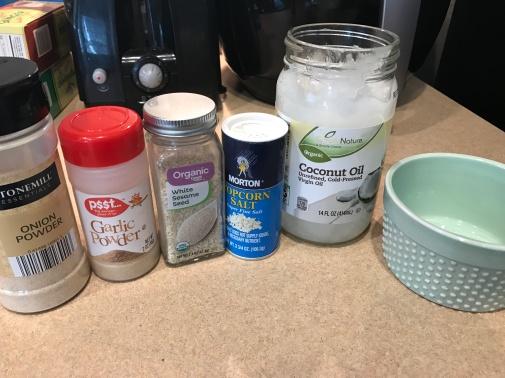 I coated the inside of the ramekin with coconut oil, and mixed the spices together in a sandwich bag.  I added the spices to the bowl, trying to make it stick as best I could on the sides.  Then I poured the mixture into the ramekin and placed in the microwave for two minutes. 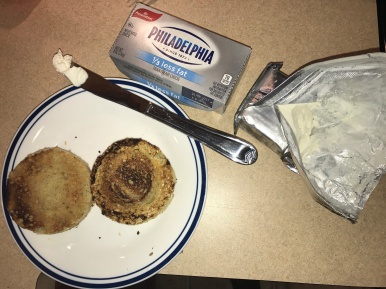 It actually came out pretty good.  The thickness was not as thick as a bagel but not as thin as an English muffin, somewhere in-between.  Tasted good with some cream cheese, and I imagine it would be good with butter or a fruit spread as well.  Maybe use this strawberry filling mixture from this recipe I found on Pinterest; it was leftover from my failed attempt at making crepes.  Oh well…I made extra of the mixture’s dry ingredients and placed in a sandwich bag so later in the week I just have to add in the wet ingredients and go.

I don’t know why I didn’t think of this while I was cooking, but when I make these again I’ll use the “everything” spices on top of the English muffin in addition to coating the inside of the ramekin with it.  And I was thinking that these might fare well in the oven using a donut mold for it to be more more like an authentic Everything bagel.  I’ll try that again in the future.  But it’s nice to see that even bariatric patients and those on low-carb diets can still enjoy a bagel in the morning without worrying about the carbs.  And for your FYI, a regular plain bagel is about 48g of carbs, and this version is approximately 11g of carbs (not including whatever you top it with), which I calculated using a nutrition calculator.  Just go easy on eating these, because it’s not exactly light on the calories, which still counts just as much as carbs.  Below is a screenshot of the nutrition info of the English muffin from the calculator.

As far as snacks, I basically have the usual – Greek yogurt with walnuts, fresh fruit, cheese,  and veggie stix.  I saw some peanut butter Larabars on sale so I got some of those as well.

So what are you all having this week?  I’d love to hear from you!