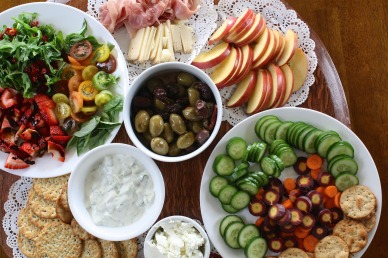 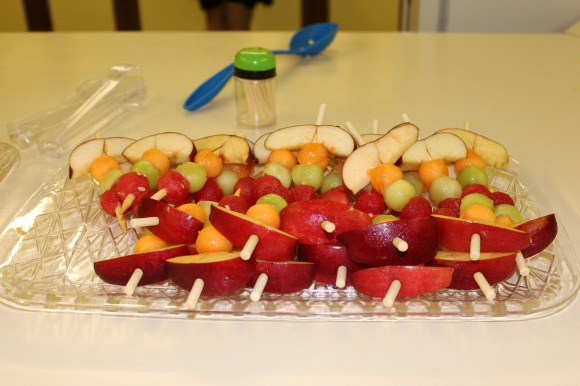 Nachos.  Buffalo wings.  Pizza.  Chips.  Dips.  Beer.  Lots of beer.  And then more beer.  That’s what you’d normally expect when you go to a Superbowl  party.

YOU NEED TO GET READY NOW.

The temptation is going to be strong, but keep in mind that you are still on a plan and still responsible for what you put in your mouth.  Not that you can’t ever relax and have fun and enjoy some of your favorite foods, but for bariatric post-ops, you need to be especially careful.  Not only can those greasy, salty, sugary, fried foods turn your stomach upside-down, but if are still having problems controlling your food intake (remember what got you to surgery in the first place???) then trying a little of this, a little of that, could send you back down a slippery slope of addiction.  A recovering alcoholic cannot handle just one shot…you are in the same boat.

And guess what?  That’s ok!  It’s ok that you are not eating the same things the other party-goers are eating.  Who cares if they are staring or asking you to have some or taunting you because you are eating “rabbit food” while they are eating the “good stuff”.  Your eating and drinking is about you doing what’s best for your health.  Your fun comes from the camaraderie (and watching the Falcons win). You can do yourself a huge favor by coming to the party prepared with food and drink in hand.

I wanted to post an article to get you started thinking about your game plan now if you have not done so already. There are a ton of great, low-carb appetizers and dishes you can bring, just do a search on sites like Pinterest and it brings up a ton of great ideas, like this one and this one.

Some of my favorite sites for low-carb ideas, outside of Pinterest, are Linda’s Low Carb Menus and Recipes and Paleo OMG and sometimes I look on All Recipes.  I have decided to make chicken avocado roll ups because I need something healthy yet quick, easy, and can fill a crowd (I’ll be sure to update this post with a pic of it when I make it later this week).  You may even want to check out some of the recipes from my meal prep that I’ve already posted on this site and revamp it to fit your party, like the turkey sausage and shrimp foil packets – maybe turn those in skewers?  Or make a large plate of sliced ahi tuna to serve as an appetizer?  Just throwing ideas out there.  I do have a hint for you:  Don’t announce that you are bringing something “low-carb” or “healthy”.  Just bring it, let them eat it and enjoy it.  That will help take the focus off your eating and on to the game.

So think about it NOW.  Make your game plan NOW.  And if you don’t want to bring a dish, you do have the option to bring something just for yourself or eat before you go so you won’t eat there.  Whatever you decide, I’ve discovered that when I don’t bother to think ahead of time, I’m more likely to make choices that are not the best for my health.

What do you think?  What are some things you plan to bring to watch the Big Game?

UPDATE:  I decided to bring two things – the chicken avocado rolls ups, and then I found a recipe for baked southwest chicken eggrolls.  I baked the eggrolls in the oven, but they also could have been made in my airfryer…So the southwest eggrolls came out ok, I wish I would have made them smaller and tighter and maybe even fried them because they are more like a mini burrito to me than an eggroll.  But the crowd loved them.  I brought these with salsa and plain Greek yogurt with chives for dipping sauces, and I was a little heavy-handed with the red pepper flakes to give them some zing. 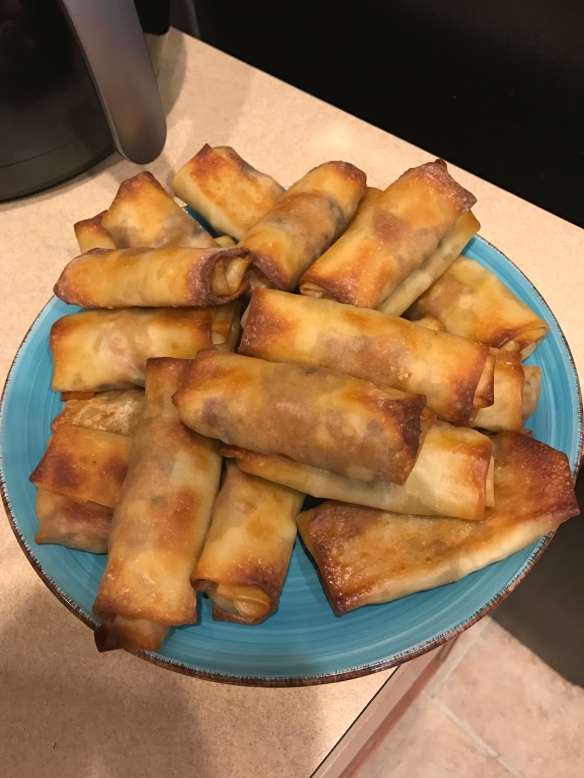 The chicken avocado roll-ups came out good as well.  The original recipe was a little bland to me, so I had to hook it up with ALOT of Tajin seasoning.  Again, it was a hit with the crowd.

UPDATE 2:  So last night I brought home alot of leftovers from the Superbowl party last night…during the party, I tried to stick to healthy proteins (smoked salmon bites, sauteed shrimp, a small piece of cod fish, and deviled egg), and later that evening did eat some guacamole dip with a few tortilla chips, and I only drank water the whole night.  That’s all I could eat over the course of the 3 hours or so, and it filled me up quick.  But of course I had to bring home all kinds of extra stuff, like those fried breaded bbq wings smothered in a tangy bbq sauce that looked sooo good, and someone brought some amazing-looking brushchetta, and someone else made Johnny Cakes, which I have not had in years.  I’m happily eating it for breakfast just having a good old time, thinking that I’ll just eat a small portion, do an extra workout later, and it should be all good…and my stomach said, “HOLD UP, WAIT A MINUTE!  DID I SAY THAT YOU COULD HAVE ALL THIS JUNK???”  Before I knew it, I was rushing to the sink, because it was all coming back up  😦

So yes…even on special occasions, as a bariatric post-op you still have to be mindful of what you eat.