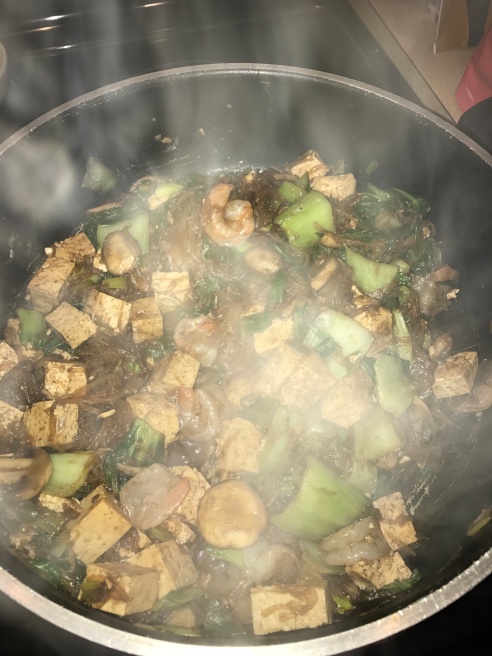 Welcome back everyone, and thank you for checking out my meal prep for this week.

Last week I did foil packets using shrimp and turkey sausage; it was so good, quick, and easy that I decided to do it again for this week.  For this week, I have chicken, rutabaga and green bean foil packets, and a shrimp and tofu stir fry with eggrolls.  I also decided to make a breakfast dish this time – mushroom and spinach breakfast cups.

For the chicken, rutabaga and green bean packets, I took chicken thighs, removed the fat and skins (save the skins for the 2nd recipe), and seasoned with just a touch of Old Bay, black pepper, and a pat of butter.  I decided to use diced rutabaga to each packet, since it is a healthy low-carb alternative for white potatoes.  Baked for about an hour, and done! Everything came out juicy and moist, was so good. 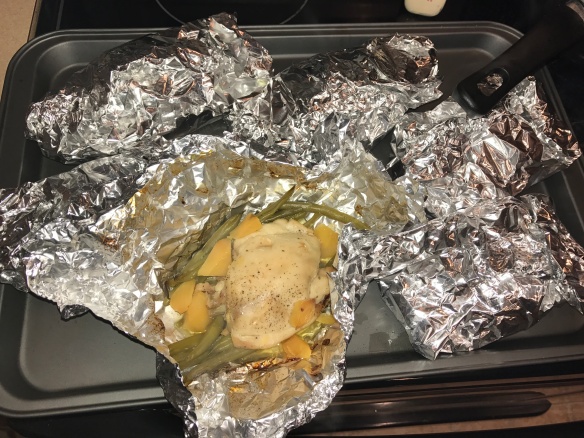 I found a recipe for chicken stir fry, but as usual I put my own spin on things.  I instead made a shrimp and tofu stir fry.   For the shrimp and tofu stir fry, I used spaghetti squash as a substitute for lo mein, in addition to the other ingredients – garlic, onion, bok choi, mushrooms, ginger, green onion and low-sodium vegetable broth.  I also decided not to use fish sauce because of the high amount of sodium; I used low-sodium soy sauce instead.  I do want to mention that the day before I pressed the water out of the tofu overnight so that it would be nice and firm to use in the recipe.  I spiced it the dish up with a few shakes of red pepper flakes.  This came out really really good, better than I expected.

Now for the eggrolls, I found a great recipe from Survival Punk that I would have never thought of – using chicken skin for the egg roll wrappers.  Now be careful with these;  granted, they have zero carbs, but chicken skin is also where you find fat (actually about 8g per serving, most of which is unsaturated, but still…and each skin is about 90 calories as well.  An entire chicken skin from a roasted chicken is about 500 calories, so you can see that you could quickly eat up a ton of calories if you eat too much of them). So be easy on these and have only one with your meal.   If you prefer to use regular egg roll wrappers, they generally have about 17g of carbs each.  I’m allotted 25g of carbs per day as a bariatric post-op (talk to your doctor about your limit, because some have different standards), so again, that means ONE if I were to decide to have that as part of my daily budget of carbs, and watching the rest of the day very carefully.

For the filling, I used vegetables only – to save on time I brought a package of diced cabbage, onion, and bell pepper. I added some ginger and diced garlic, then put a scoop of the mixture inside each skin.  To help each stay together, I would have used toothpicks but I didn’t have any, so I saw online that traditionally people use a mix of water and flour to seal them. so I did that.  And instead of deep frying them, I used my air fryer.*  I sprayed the outside of each eggroll with canola oil cooking spray, and then cooked in the air fryer for about 30 mins (15 minutes on each side, and I had to re-seal them when I flipped them).  It took some time, but they came out crunchy and juicy and so good!  The taste of the chicken just added a nice flavor to them.  I used a teaspoon of Mae Ploy as a dipping sauce,  but they are so good they really don’t need it.**

Sometimes I don’t always want a Greek yogurt for breakfast, so to add a little variety for this week, I made spinach and mushroom breakfast cups.  Just mix egg, spinach, mushroom, cheese, black pepper, garlic powder, and onion powder, and then put in your muffin tin and bake about 20 minutes. 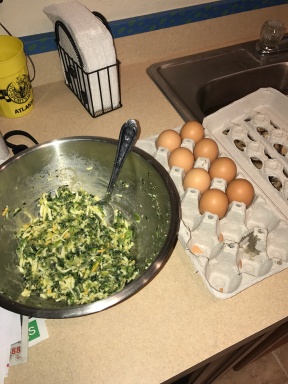 And as usual, I have my snacks.  I continued to focus on  low-glycemic fruits, such as strawberries, watermelon and honeydew melon.  I still had my Greek yogurt with chopped nuts, and mozzarella cheese sticks handy. 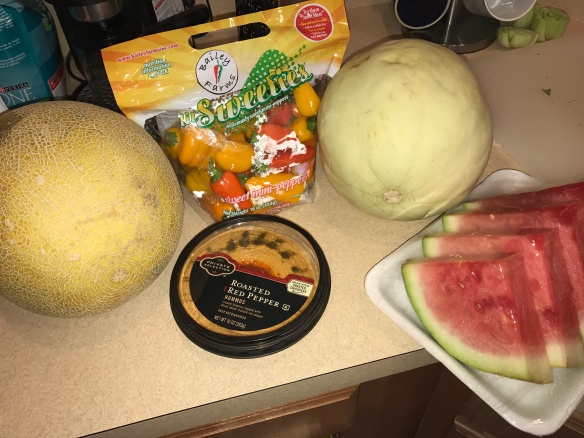 I decided to take a break from regular snack nuts this week because I was eating too much of them, as reflected on the scale in the past two weeks. Remember – just because a food is low-carb does not mean that it is low calorie.  One cup of mixed nuts has damn near 900 calories (and no, that is not a typo).  So I might try again next week or so, and will measure out single servings of nuts into sandwich bags using my food scale…sucks, but that is part of the lifestyle now.

So instead of nuts, I brought bell peppers and hummus.  The bell peppers are cut in half, scoop out the seeds, and used as a substitute for chips.  I could also melt the mozzarella cheese on the bell peppers for a snack as well.  Shoot, if I get bored during the week, I might even make nachos with them, we’ll see.

* A hint about the air fryer – I’ve had better results when lining the basket with non-stick aluminum foil.

** UPDATE – Ok so I reviewed my blog with my dietitian to talk about my meal prep.  She pointed out that she recommended about a daily limit of 17g of fats for me…so that means basically having ONE egg roll because of the amount of saturated fat in chicken skin.  So in the future this recipe will be tweaked…